Chinese Chestnuts Can Make a Valuable Addition for Iowans

Midwesterners wanting to add edible diversity to their woodlands or to their backyards may want to consider the benefits of growing Chinese chestnut trees.

Unlike American chestnuts, which were largely decimated by a fungal canker blight in the last century, the Chinese species is blight resistant and has proven to be weather resistant most years. 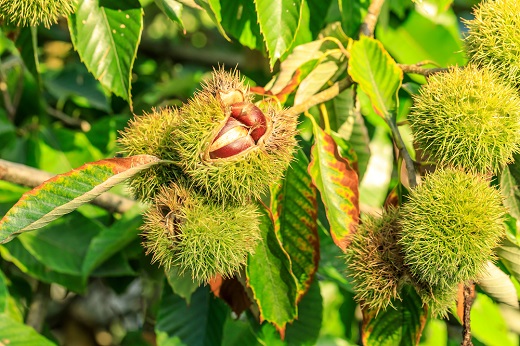 Patrick O’Malley, commercial horticulture specialist with Iowa State University Extension and Outreach, said Chinese chestnuts can start producing nuts within three to four years of establishment, and can produce 10-15 pounds of nuts per tree by the 10th year. After several decades, the trees can reach heights of 40-60 feet and produce as much as 50 pounds of nuts per tree.

“Currently, about 100,000 pounds of chestnuts are produced in Iowa,” according to O’Malley.

O’Malley explains the planting and growing of Chinese chestnuts in the November-December edition of the Acreage Living Newsletter. He owns about 50 chestnut trees himself, and said another reason the Chinese species is more desirable is the shorter height — the American species grows more vertically.

While many Iowans grow chestnuts for their own use, and as a holiday favorite, they also hold some market potential. Retail sales can see $5 per pound or more, he said, and those selling to a co-op can earn about $3 a pound.

Nut quality and storage is important. O’Malley said after about a week of drying, harvested chestnuts need to be refrigerated, and most people who consume them will want to roast or cook them in some way.

One potential drawback to planting Chinese chestnuts, he said, is if the tree is going to be planted as a shade tree. The nuts are enclosed in a very spiny spur that eventually falls to the ground, causing the potential for some prickly encounters with those below.

O’Malley’s article covers soil condition and spacing needs for chestnuts, and points out that even though Chinese chestnuts have mostly withstood the past several decades of Iowa weather, they did suffer a significant setback in 2019, when many of the trees leafed out late and some died.

Iowans can get creative with their chestnut tree plot, and even plant vegetables and small fruits between the rows for about the first decade of the chestnut tree’s life, until the canopy thickens and takes over.

Learn more about Chinese chestnuts in O’Malley’s article. He can be reached at 319-337-2145, or omall@iastate.edu.